Eurovision Song Contest organisers say they may ban countries from the competition if broadcasters disclose information about voters’ identities. It comes after a number of people in Azerbaijan were questioned by police after voting for a song by neighbouring Armenia in this year’s contest. Phone companies had been responsible for protecting voters’ details, but now broadcasters will shoulder the burden. Sanctions against offending countries could be a ban of up to three years. The European Broadcasting Union (EBU) said the rule change was to ensure the protection of voters’ privacy. Last month, an Azerbaijani man told the BBC he had been accused of being unpatriotic and a “potential security threat”, after he sent a text backing Armenia’s song, Jan Jan. The country’s authorities said people had merely been invited to explain why they voted for Armenia.
POSTED: 20/09/09 – Source: BBC News Online

Sir Terry Wogan has revealed he thought Graham Norton’s commentary at this year’s Eurovision Song Contest in Moscow was “wonderful”. The broadcaster told the Radio Times he thought the contest was “a spectacular show without a flaw in it”. Norton took over as commentator after Sir Terry stepped down, saying the contest’s voting was too political. This year the UK’s entry Jade Ewen came fifth with a win for Norway’s singer and violinist Alexander Rybak. Sir Terry announced his intention to retire as Eurovision commentator after the 2008 contest in Belgrade, where the UK’s entrant Andy Abrahams finished last.He said the result was “tremendously disappointing” and that western European nations would have to question their future participation. “Contrary to what is often believed I love Eurovision, or I couldn’t have presented it for as long as I did,” Sir Terry said. “This year they sorted the voting out, and I thought Graham Norton was excellent. “People have said his approach was rather like mine, and all I can say is I take that as a compliment.” Norton’s performance was widely praised by critics, with his tongue-in-cheek style of humour seen as bringing a fresh feel to the role. The 2009 contest, which ushered in a revised voting system, saw countries which had fared poorly in recent years – including the UK and France – return to the top 10.
POSTED: 28/07/09 – Source: BBC News Online

The 2009 Contest Review
Norway has emerged as the winner of the Eurovision Song Contest, held in the Russian capital, Moscow. Singer and violinist Alexander Rybak, 23, smashed the record for the most points awarded during the competition. Iceland came second in the vote, followed by Azerbaijan which took the third place. The UK’s Jade Ewen, singing an Andrew Lloyd Webber song, ended in fifth position – a marked improvement on last year’s finish at the foot of the table.

For the first time, voting in the final was split between televoting and panels of musical experts, which was supposed to reduce the incidence of predictable and neighbourly votes. A total of 42 countries voted on the 25 songs, with Norway scoring a record 387 points.

Alexander Rybak, who was born in the former Soviet Union, is a well-known musician in Norway. A classically-trained violinist and pianist, he wrote his country’s winning entry, Fairytale. The previous biggest points haul was scored by Finland’s Lordi with Hard Rock Hallelujah in Greece in 2006. No country suffered the indignity of receiving “nul points” this year but Finland finished in last place.

Denmark’s entry – Brinck singing Believe Again – was written by Boyzone’s Ronan Keating and was performed in the Irish singer’s style. Germany’s act featured US cabaret artist Dita von Teese, who used to be married to rock star Marilyn Manson. Her costume was slightly more demure that her outfit at the dress rehearsal after she was reportedly told to cover up by the European Broadcasting Union, which runs Eurovision, because it was unsuitable for a family audience.

Graham Norton was making his debut as commentator for the BBC, replacing Sir Terry Wogan, who bowed out last year. Speaking in the Russian capital, Norton revealed that he had spoken to his predecessor, who commentated on every Eurovision final from 1980. “Terry rang me to wish me good luck,” said the TV presenter. “He advised me to resist having a drink until the fifth song,” he added.
POSTED: 17/05/09 – Source: BBC News Online

Seven-times Eurovision winners Ireland have failed to qualify for Saturday’s final of the song contest in Moscow. The country’s pop-rock entry was not among the 10 successful nations in Thursday’s semi-final, which included Denmark, Ukraine, Estonia and Greece. The success of the night was Estonia, who last appeared in the final in 2003. But it was all not all bad news for the Irish, as Denmark’s successful song was co-written by Ronan Keating. Following Thursday night’s semi-final, the draw for Saturday’s final was made. The UK’s Jade Ewen, who will take part in her first full dress rehearsal on Friday, will perform 23rd in a line-up of 25 songs. Bookmakers Ladbrokes are tipping Norway’s singing violinist Alexander Rybak as the favourite for the big night, followed by Greece, Turkey, Azerbaijan and the UK
POSTED: 15/05/09 – Source: BBC News Online

Last night , the Second Semi-Final of the 2009 Eurovision Song Contest took place in the Olimpiyskiy Arena in Moscow. The remaining ten places available in the Final have now been decided during tonight’s nailbiting show. The show was broadcast live from the Olimpiyskiy Arena in Moscow, and just like the First Semi-Final, it was presented by Natalia Vodyanova and Andrey Malakhov. The theme of the Second Semi-Final was that of modern people and comedy and irony, and the stereotypes people still have about Russia and Russians. The atmosphere inside the arena was electric, an array of different flags and colours being waved in every corner.
Nine qualifying countries were picked by televoting, and a tenth finalist was selected by the national juries all over Europe, unless of course the top ten matched exactly with the televoting and juries, this will not be confirmed immediately. All the countries represented in the Second Semi-Final were voting, as well as France, Russia and Spain. This is the list of countries that qualified in the order they were announced (the full results and placings will be revealed after the Final of the 2009 Eurovision Song Contest)

Last night , the First Semi-Final of the 2009 Eurovision Song Contest took place in the Olimpiyskiy Arena in Moscow. In an exciting show, the representatives of ten countries were picked to advance to the Final. Millions of viewers tuned in tonight to watch the First Semi-Final of the 2009 Eurovision Song Contest. The show was broadcast live from the Olimpiyskiy Arena in Moscow, and it was presented by Natalia Vodyanova and Andrey Malakhov. Nine qualifying countries were picked by televoting, and a tenth finalist was selected by the national juries all over Europe. All the countries represented in the First Semi-Final were voting, as well as Germany and the United Kingdom. This is the list of countries that qualified:

Graham Norton has broken two of his ribs after falling down stairs at home, after last weekends BAFTA’s, after too much wine at the after-show party. He had to get hospital treatment. The problem for Graham is the pain killers they have given him say avoid alcohol so he will have to stay sober when he presents The Eurovision Song Contest for the BBC later this month. He was looking forward to getting drunk.
POSTED: 01/05/09

Georgia’s entry has been ruled unacceptable by organisers of the Eurovision Song Contest in Moscow, because of some of its lyrics. The disco-funk song, We Don’t Wanna Put In, appears to poke fun at Russian Prime Minister Vladimir Putin. However, it is against the competition’s rules to allow political content in entries. The song, which was chosen by a public vote and jury, was due to be performed by female trio 3G along with male vocalist Stephane. The song, which has a distinct 1970s feel, contains the chorus: “We don’t wanna put in, the negative move, it’s killin’ the groove.” Even the title of the song appears to be play on the politician’s name. The Geneva-based European Broadcasting Union, which runs the contest, said Georgia can rewrite the lyrics of its entry or select another song. Natya Uznadze, the group’s producer, said they had yet to receive official confirmation of the decision. Vladimir Smirnov from Russia’s state-run Channel One – which will broadcast the contest – said the network had nothing to do with the decision. Russia won the right to host the annual event after winning last year’s competition.
POSTED: 11/03/09 – Source: BBC News Online

Georgia has chosen an entry which takes a swipe at Russian Prime Minister Vladimir Putin for May’s Eurovision Song Contest in Moscow. But disco-funk song We Don’t Wanna Put In, a play on the politician’s name, could fall foul of Eurovision’s rule against political content in entries. The 2009 entry, which was chosen by public vote and jury, will be performed by female trio 3G along with male vocalist Stephane. The song, which has a distinct 1970s feel, contains the chorus: “We don’t wanna put in, the negative move, it’s killin’ the groove.” “I’m gonna try to shoot in, some disco tonight. Boogie with you.” Eurovision spokesman Sietse Bakker said organisers would not comment on the song until a meeting on 16 March when all 43 entries are scrutinised. “Until then, Georgian Television is free to make changes to the song, should they see the need.”
POSTED: 20/02/09 – Source: BBC News Online 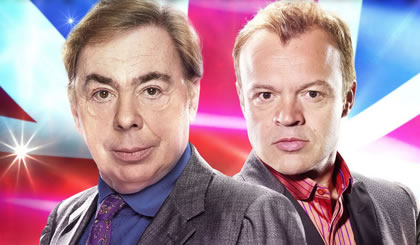 The singer who will represent the UK in this year’s Eurovision Song Contest has been chosen. For the past month, six contestants, chosen by Andrew Lloyd Webber, have been battling it out on a live show. The public vote eliminated one act each week. Last night, on the final of the show called Your Country Needs You, Jade Ewen was crowned the winner. Jade will fly the flag for the UK at this year’s Eurovision in Moscow on 16th May. She will perform a track that has been written by Andrew Lloyd Webber, especially for Eurovision, called ‘It’s My Time’.