Michael Rice (above), who won BBC talent show All Together Now last year, has been chosen to fly the flag for the UK at this year’s Eurovision Song Contest. The 21-year-old from Hartlepool, who was also on The X Factor in 2014, was picked in a TV viewers’ vote on Friday. He will now travel to Israel in May in the hope of impressing Eurovision fans with his rousing anthem Bigger Than Us. The UK has struggled in recent years – it has not won for 22 years and has not finished in the top 10 for a decade. Rice won the £50,000 prize on All Together Now in March 2018, using the money to take his family to Disneyland and to set up a shop selling ice cream and waffles. A former busker, he told BBC Two’s Eurovision: You Decide on Friday: “I’ve watched Eurovision most of my life, growing up.”
POSTED: 08/02/19 – Source: BBC News Online

Six contestants will battle it out to represent the UK at the Eurovision Song Contest in Israel this May. The hopefuls, mostly drawn from the ranks of TV reality shows, were unveiled on BBC Radio 2 on Wednesday. They include Michael Rice, who won BBC singing competition All Together Now last year, and 2017 X Factor competitor Holly Tandy. Unusually, the six contestants share three songs – each putting their own spin on one of the potential entries. The public will choose who goes through to the final in a live TV show, Eurovision: You Decide, on Friday, 8 February. 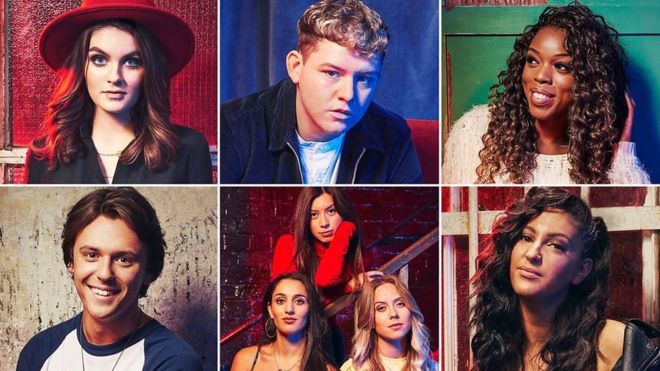 As British politicians debate the country’s future relationship with the EU, another vital question about the UK’s role in Europe is being addressed – how it chooses a Eurovision entrant. The BBC has announced it will overhaul the selection process in 2019. Three songs will each be performed in two different styles by two different artists, with one act from each pair going through to a final public vote. Last year, SuRie came 24th out of 26 and had to deal with a stage invader. She had been chosen to represent the UK via a combined public and jury vote. This time, an international jury will choose the three songs and then give viewers a choice of different ways they could be performed, before the vote to pick the winner. Eurovision: You Decide will be screened in February on BBC Two, live from Salford, hosted by Mel Giedroyc and Måns Zelmerlöw, who won the contest for Sweden in 2015. The eventual victor will represent their nation in the grand final of the Eurovision Song Contest in Tel Aviv, Israel, on 18 May. Netta won the event this year for Israel. Eurovision: You Decide’s executive producer Mel Balac said: “Our exciting ‘euro-version’ format will give fans the chance to compare and contrast these fantastic songs in a fresh, new way and deliver the United Kingdom the artist it deserves to fly the flag out in Tel Aviv.”
POSTED: 30/11/18 – Source: BBC News Online