25-year-old Tom Neuwirth’s creation Conchita becomes a symbol for tolerance across Europe. His old parish priest Father Michael Unger smiles at a sweet photo of the youngster longingly touching his friend’s dress at the service. “From the age of three or four, he always wanted to dress like this,” said Fr Unger. “But he had to hide it. He so badly wanted to dress like the girls and got upset when he wasn’t allowed.” Fr Unger is one of many villagers in tiny Bad Mitterndorf who proudly cheered Conchita to victory in last week’s contest. And today drag queen Tom’s priest, childhood pals and former teachers brush aside Russia’s scornful attack on the singer that a transvestite with a beard shouldn’t be the face of Europe. They prefer to recall how he used to borrow his girlfriends’ clothes and loved to belt out Celine Dion classics.
POSTED: 18/05/14 – Source: mirror.co.uk

BBC1’s coverage of the show drew an average audience of 8.8 million and at it’s peak had 10.5 million – more than half of all viewers – as the show neared its climax, according to overnight figures. But not everyone was raving about the Austrian winner – a drag act – who burst into first place with her long hair, faux lashes and well-groomed beard. Vladimir Putin’s right-hand man, Dmitry Rogozin, was less-than impressed with fabulous Conchita’s victory in the Europe-wide competition. He told The Sun: “[This result] showed supporters of European integration their European future – a bearded girl.” While another Russian politician, Valdimir Zhirinovsky, the leader of Russia’s Liberal Democrat party, said: “It is the end of Europe. There is no limit to our outrage.” But the Austrian winner, real name Tom Neuwirth, explained after securing victory: “This award is dedicated to everybody who believes in a world of peace and freedom.”
POSTED: 12/05/14 – Source: express.co.uk

Austrian drag act Conchita Wurst has been crowned the winner of the 59th annual Eurovision Song Contest held in Denmark’s capital, Copenhagen. The singer, whose real name is Tom Neuwirth, won with the song Rise Like a Phoenix, collecting 290 points. The Netherlands finished second with 238 points, with Sweden in third place with 218 points. The UK’s Molly Smitten-Downes came 17th, with 40 points for her song Children of the Universe. It is the first time Austria has won the contest since 1966, and only the second time the country has competed in the final in the past 10 years as it either did not participate or qualify. Wurst had been the second favourite to win behind Sweden going in to the competition, with many predicting the act could be too divisive among voters. However she was the clear winner, with her victory announced after 34 of the 37 countries had submitted their scores. Collecting her trophy on stage the singer said: “This night is dedicated to everyone who believes in a future of peace and freedom. You know who you are – we are unity and we are unstoppable.” Speaking backstage later, Wurst said she felt Europe had taken a stand by voting her the winner. “I dream of a world where we don’t have to talk about unnecessary things like sexuality, who you love. I felt like tonight Europe showed that we are a community of respect and tolerance”
POSTED: 10/05/14 – Source: BBC News Online

Eurovision presenter Graham Norton has revealed he still hears predecessor Sir Terry Wogan’s voice in his head when he is commentating on the song contest. “It’s like I’m keeping the seat warm – Terry’s still in my head, it’s still his competition,” said Norton, who replaced Wogan as UK host in 2009. He was speaking ahead of the grand final in Copenhagen, Denmark.
POSTED: 10/05/14 – Source: BBC News Online

The results from the second Eurovision 2014 semi-final have been revealed. Ten acts made it through to the final, including Austria’s Conchita Wurst and Greece’s Freaky Fortune and RiskyKidd. However, Ireland’s entry Can-Linn, featuring Kasey Smith, failed to make it to this weekend’s final. Drag act Wurst – real name Tom Neuwirth – has been the most talked-about contestant in this year’s contest, with many Eastern European countries campaigning for Austria to be disqualified, and Wurst being labelled a “pervert” by Russian politician Vitaly Milonov. Russia’s Tolmachevy Sisters and Ukraine singer Mariya Yaremchuk were among the first ten acts to secure their place in the final on Tuesday (May 6).
The full list of the winning acts from semi-final 2 are: Switzerland, Slovenia, Poland, Romania, Norway, Greece, Malta, Belarus, Finland and Austria.
POSTED: 08/05/14 – Source: digitalspy.co.uk

The results from the first Eurovision 2014 semi-final have been revealed. 10 acts made it through tonight, including Russia’s Tolmachevy Sisters and Ukraine singer Mariya Yaremchuk. Montenegro and San Marino qualified for the final – taking place on Saturday – for the first time ever. The 17-year-old Russian Tolmachevy twins were, however, booed heavily after it was announced they had got through. The reaction is believed to be down to President Putin’s outspoken homophobia and the nation’s aggression towards Ukraine. The UK, France, Italy, Spain, Germany and host country Denmark are already in the final.
The full list of the winning acts from semi-final 1 are: Armenia, Hungary, Russia, Montenegro, Azerbaijan, San Marino, Ukraine, Sweden, The Netherlands and Iceland.
POSTED: 06/05/14 – Source: digitalspy.co.uk

Russia’s Tolmachevy Sisters were booed in Copenhagen as they qualified for the final of the Eurovision Song Contest. The 17-year-old twins initially received a warm reception for their song, Shine, at Tuesday’s semi-final. But when they progressed to the final, some sections of the 10,000-strong audience expressed apparent disapproval of the Russian artists. Experts have said Russia could suffer at Eurovision over the crisis in Ukraine and its stance on gay rights.
POSTED: 07/05/14 – Source: BBC News Online

Back in January, Molly Smitten-Downes was working part-time in a shop to help pay for her band’s rehearsal room – now she is in Denmark for the 59th Eurovision Song Contest. This Saturday in Copenhagen she will fly the flag for the UK with her self-penned song Children of the Universe. Bookmakers saw a flurry of bets for Molly after this week’s rehearsal at the 2014 venue, B&W Hallerne, a revamped shipyard. She told the BBC the whole experience has been “a whirlwind” and “a dream”. The whole thing is just this big machine of positivity and excitement and I really wasn’t anticipating that. There’s this big “Eurovision army” that takes it seriously, but in a really fun way. They are so encouraging and positive about all the entries and it’s a really nice vibe. It’s come as a surprise.
POSTED: 07/05/14 – Source: BBC News Online 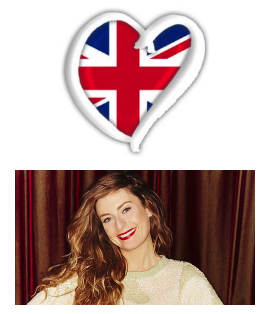 Little-known singer-songwriter Molly Smitten-Downes is to represent the UK at this year’s Eurovision Song Contest. The 26-year-old will carry British hopes in Copenhagen, Denmark, in May with her song Children of the Universe. The pop singer has already had a taste of the limelight after having a UK top 10 hit in 2008 with Sash on the song Raindrops (Encore Une Fois). Her selection comes after Bonnie Tyler and Engelbert Humperdinck struggled for the UK in the past two contests. Tyler came 19th out of 26 countries in 2013, while Humperdinck finished 25th the previous year. Smitten-Downes, who is known simply as Molly on stage, said: “To represent the United Kingdom in such a huge competition, not only as a singer and performer but as a songwriter is an unbelievable honour. I hope I can do us proud.” A BBC statement described Children of the Universe as “an anthemic, uplifting track specifically written with live performance in mind”.
POSTED: 03/03/14 – Source: BBC News Online

Countries found to be vote-rigging at the Eurovision Song Contest will face bans of up to three years, organisers have said. The announcement follows an investigation into attempts to influence the voting in favour of Azerbaijan during last year’s contest. Organisers confirmed rigging attempts were detected by its security systems, but the votes were declared invalid. It added there was no evidence to link Azeri broadcasters to the activity. The European Broadcasting Union (EBU) said as there was also no evidence to suggest Ictimai TV was aware of the attempt, no sanctions would be imposed. Allegations of vote-fixing arose after Azerbaijan failed to award any points to neighbouring Russia. It prompted Azeri President Ilham Aliyev to order an inquiry, as traditionally ex-Soviet republics have regularly given each other top marks. There were also claims of attempts in Lithuania to buy votes for Azerbaijan’s entry. It is hoped tightening rules will “strengthen the credibility of the voting and protect the Eurovision Song Contest brand”.
POSTED: 07/02/14 – Source: BBC News Online

Eurovision organisers have announced changes to the song contest’s jury rules, amid allegations of bribery. From next year, the names of each country’s jury will be revealed ahead of the competition in an effort to increase openness and accountability. For the first time, individual juror scores will also be published immediately after the final. The changes come after it was alleged votes had been bought for the Azeri contestant at this year’s contest. Previously, the identity of jury members – whose votes account for 50% of the points each country awards it competitors – was not disclosed until after the final.
POSTED: 23/09/13 – Source: BBC News Online